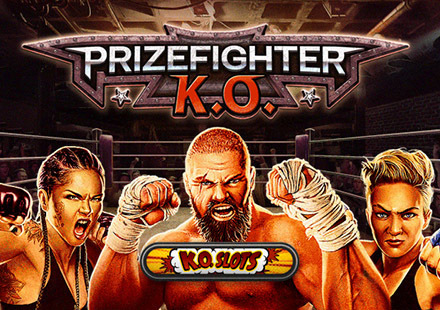 A 6x4 slot machine with an Automatic symbol Knockout and Loot Box feature trigger. Loot Box wins can reward an Instant Cash prize or Champion Mode Free Spins, in which an EverWin feature guarantees that every Free Spin is a win.

AUTOMATIC KNOCKOUT OF SYMBOLS TO LINE UP LOOT BOX WINS!
The Auto Knockout feature automatically knocks out (K.O.) symbols on the reels in order to line up Loot Box wins during the Base Game. When a symbol is knocked out, it disappears and the symbols above it in the same reel will cascade down to ﬁll the empty space. Loot Box wins must be matches of 3 or more Loot Boxes in a horizontal row, anywhere on the reels. The game will automatically achieve the best possible Loot Box win with the K.O. charges currently available. Charges are earned at a rate of 1 charge per 11 spins, and each charge can K.O. one symbol.
Loot Box wins of 3 of a kind will result in an Instant Cash prize, whereas wins of 4 - 6 of a kind will result in Champion Mode Free Spins!

CHAMPION MODE FREE SPINS FEATURING EVERWIN
EVERY FREE SPIN IS GUARANTEED A WIN Winning combinations of 4 - 6 Loot Boxes will reward players a varying amount of Champion Mode Free Spins, which include an EverWin feature which guarantees that every Free Spin will result in a win!
The EverWin feature guarantees the player will always receive a win amount at least equal to that of the current EverWin value. The EverWin value is ﬁrst set by the bet amount that the player used when triggering Champion Mode Free Spins. If the player receives a total spin win result that is greater than the current EverWin value, then they will receive the greater pay amount. The EverWin value is then increased to match this new amount, and the player is awarded an additional Free Spin! This process continues until all Free Spins are spent.